An interview of Ted Gravenhorst Jr., Vice President of Sales and Marketing for John Boos & Co.

Boos is a leading manufacturer of kitchen furniture and accessories, and the worldwide leader in butcher block products.

Mark:  John Boos & Co. has a long, rich history. What can you tell us about the origins of the company?

Ted:   Conrad Boos founded the company in 1887, naming it after his son John. Together they harvested Sycamore from the woods around Effingham, IL and processed it at the family’s sawmill. These first blocks were essentially slices of tree trunks that proved to be excellent work surfaces for blacksmiths. Next, they found their way into textile mills and factories throughout the Midwest. When John Boos came up with the idea of placing these wood slabs on legs and peddling the tables to butchers working local meat markets, that’s when the butcher block was born. Then with the advent of railways, Boos expanded distribution to both coasts.

Mark:  Please tell us about your visionary ancestor and how he came to be involved in the business, Ted.

Ted:   In the early 1890s demand for Boos chopping blocks in commercial meat markets was growing fast. My great, great grandfather, Adelbert Gravenhorst, had come to the states from Germany. He came across the Boos operation and immediately saw the potential. He invested in the company so they could expand manufacturing to meet growing demand.

Mark:  So the company entered the new century well capitalized and with good sales momentum. What are some of the key milestones from the 1900s?

Ted:   Boos Blocks began to appear in restaurants, food stores and butcher shops across America. Then during WWII, Boos took on contracts with the armed forces to supply tables and tabletops for mess halls and kitchens. So the product line was suddenly a lot broader, but still focused on commercial and foodservice customers. 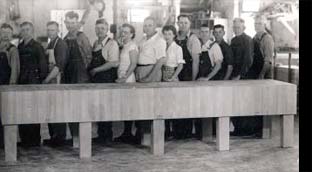 Ted:   It wasn’t until the 1960s that Boos set up a retail division to cater to the residential market. They added butcher block countertops, chopping blocks and cutting boards that they began selling to Williams-Sonoma stores.

Mark:  When and why did Boos add stainless steel tables to its product line?

Ted:   Well, in the 1960s foodservice and supermarket customers shifted pretty abruptly from wood butcher blocks to stainless steel tables with plastic tops, at the urging of the U.S. government.  At the time, it was believed that plastic was better than wood for reasons of food safety. It wasn’t until the 1990s that scientists definitively proved that wood was actually safer than plastic. In the meantime, sales of butcher blocks took a hit. So Boos really had no choice but to diversify. That’s really what drove the company into stainless steel tables for commercial and foodservice customers, and into retail store distribution to tap the residential market.

Mark:  How did those diversification moves work out?

Ted:   Boos sold lots of butcher block tops to restaurants and hospitality customers in the 60s and 70s, and plenty of heavy-duty stainless steel tables to supermarkets. And of course, expansion into retail proved to be a smart move.

Mark: What did the landscape look like when you joined the company in 1987? What were some of the early challenges you faced?

Ted:   That earlier move into steel fabrication really turned things around. Supermarket and industrial sales were growing nicely and accounted for about 2/3 of total company sales at the time. Then in 1990-91, our largest supermarket customers were on a kick to consolidate suppliers. Some informed us that they wanted a single source of supply for both their stainless steel tables and sinks. The problem was that our steel fabrication capabilities were still somewhat limited. But we made something of a leap of faith and submitted a proposal on a steel table and sink bid package issued by a leading supermarket chain, having never made a single stainless steel sink. Much to our surprise, we won the bid, so we had to scramble to quickly figure out how to make stainless steel sinks and to make sure we didn’t lose money on the deal. Fortunately, the company has always been quick to adapt. That’s really a key corporate strength.

Mark: Speaking of adaptation, how did Boos fare during the recent Great Recession? How are things today?

Ted:   We weathered the storm pretty well, all in all. In 2009 our retail sales declined double digits, and our countertop sales took a big hit as new housing starts and remodels slowed, but remarkably, we saw our commercial sales grow year over year.

Today we’re benefitting from initiatives implemented over the past two decades, like when we expanded our steel fabrication capacity and when we started a retail division. Another wise move was to sign up online dealers when the internet first came on the scene. Both online and physical stores are important to us, so we support both channels to the best of our abilities.

Mark: What’s ahead for Boos & Company?

Ted:   Well, we’re in a good place right now and I’m quite optimistic. The Boos brand is stronger than ever. Our plants are running efficiently and adding flexibility. We keep adding new products and sales keep growing. It’s pretty clear that our best days are ahead of us.