Trees are typically cut into planks, which are oftentimes cut into smaller strips (or rails) of wood. In constructing a butcher block, the woodworker must decide which grain of these wood strips will face upward: its face, edge or end grain.

END GRAIN - And finally, both ends of the plank reveal the wood's end-grain. End-grain wood is the most distinctive, largely because it shows a slice of the tree across its growth rings. 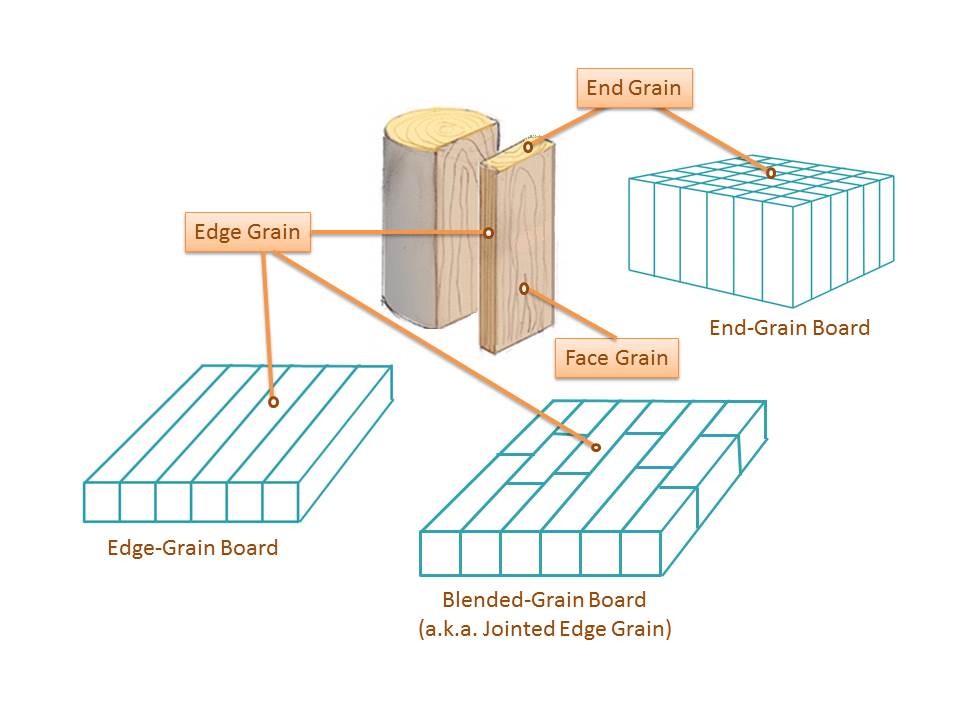 End-grain blocks are constructed by fusing together short rails or strips of wood that range in length from 1 inch to 10 inches or longer, each standing on end. Looking down on such an array one would see dozens of rectangular ENDS of wood pieces (hence the name, end-grain). Each rectangular END displays a small sample of the source tree’s growth rings. It’s what one would see if examining a cross-section of the tree’s trunk. Melded together, these small rectangles create a checkerboard array with immense color, character and durability.

The wood fibers exposed on the cut ends of wood are able to absorb sharp edges without dulling them. Essentially, the wood fibers part, yielding to knife blades, rather than resisting them. This photo, which shows a knife slicing through strands of raw spaghetti, illustrates the advantage and benefit of end-grain style butcher blocks.

In such butcher boards, the EDGES of planks face upward. In their making, wood rails are laid on one edge (the shorter of the wood strip’s two sides is its Edge; the longer side is its FACE). When viewing the surface of an edge-grain board one sees the grain pattern of a tree that would be revealed in a vertical slice of the tree. In edge-grain blocks, wood slats run the full length of the board. As a result, edge-grain butcher blocks have no unsightly butt ends or finger joints, and show relatively little color variation.

Remember, the face of the wood plank is the wider of its two vertical sides. Face-grain planks deliver a clean, expansive look because they have fewer seams and showcase more uniform face grain.

Blended-grain Butcher Blocks Are a Variation of Edge-grain Blocks

Blended style is also referred to as jointed-edge grain style because both show edge grain, of course. But instead of using uniform-sized wood rails, each spanning the board's full length, blended-style blocks use pieces of various lengths to span each row of the block. Consequently, boards made using this style have seams that run in both directions – long seams that run the board’s length and narrow seams where pieces are finger-jointed together.